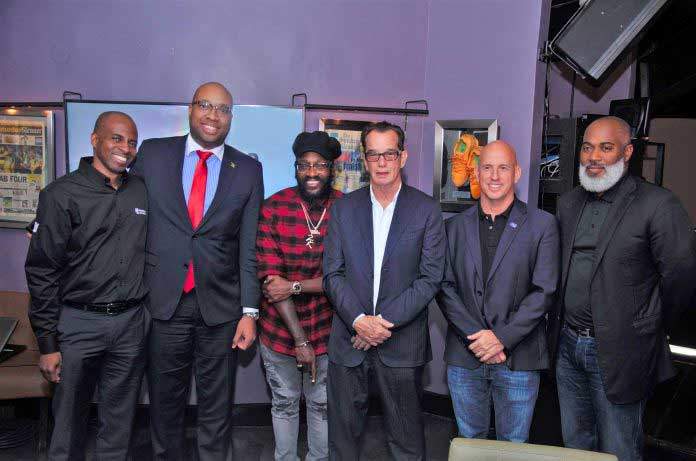 Joe Bogdanovich (third from right), Investor & CEO, Downsound Records is flanked by (from left) Lloyd Distant, CEO, Hardware & Lumber Limited; Delano Seiveright, Senior Advisor, Ministry of Tourism; Tarrus Riley, recording artiste; Gary Matalon, CEO & Director, KLE Group; and Marcus Richards, Executive Vice Chairman of Argyle Industries Inc., and Director of Hardware and Lumber at the launch of the Caribbean Love Campaign in support of post-hurricane rebuilding efforts in islands affected by hurricanes Irma and Maria. Mr. Bogdanovich will leverage the businesses and brands with which he is associated to rally donations on behalf of the people in islands impacted by the hurricanes.

As part of the campaign, Bogdanovich will leverage the businesses and brands with which he is associated to rally donations on behalf of the people in islands impacted by the hurricanes. Each business and brand will participate in the relief effort in their own way.

“As human beings, we should all be deeply concerned by what has happened over the course of the hurricane season. But this is an opportunity for us to define who we are as Caribbean people. The devastation must be met with hope, unity and a sense of purpose,” said Bogdanovich.

At present, the key initiatives of the campaign include contributions of cash from each business as well as:

A benefit concert and telethon set to take place in Kingston, Jamaica tentatively scheduled for a date in November 2017.

Donations of equipment and supplies

Hardware & Lumber will also donate equipment and building supplies. Jamaicans are also invited to make donations of canned food, clothing, tarpaulins batteries and solar lamps, etc. in containers donated by Parkland Industrial Co. at all 15 H&L Rapid True Value and H&L Agro stores across the island. One hundred percent of all donations will be distributed to the people of the affected islands.

Bogdanovich appealed to corporations and artistes to join the Caribbean Love movement. “Now more than ever, we have to stand up for our Caribbean brothers and sisters. No one could have imagined that so much could be lost so quickly. Jamaica is in the position to help in a meaningful way, but we must act now, and we must act together,” he said.